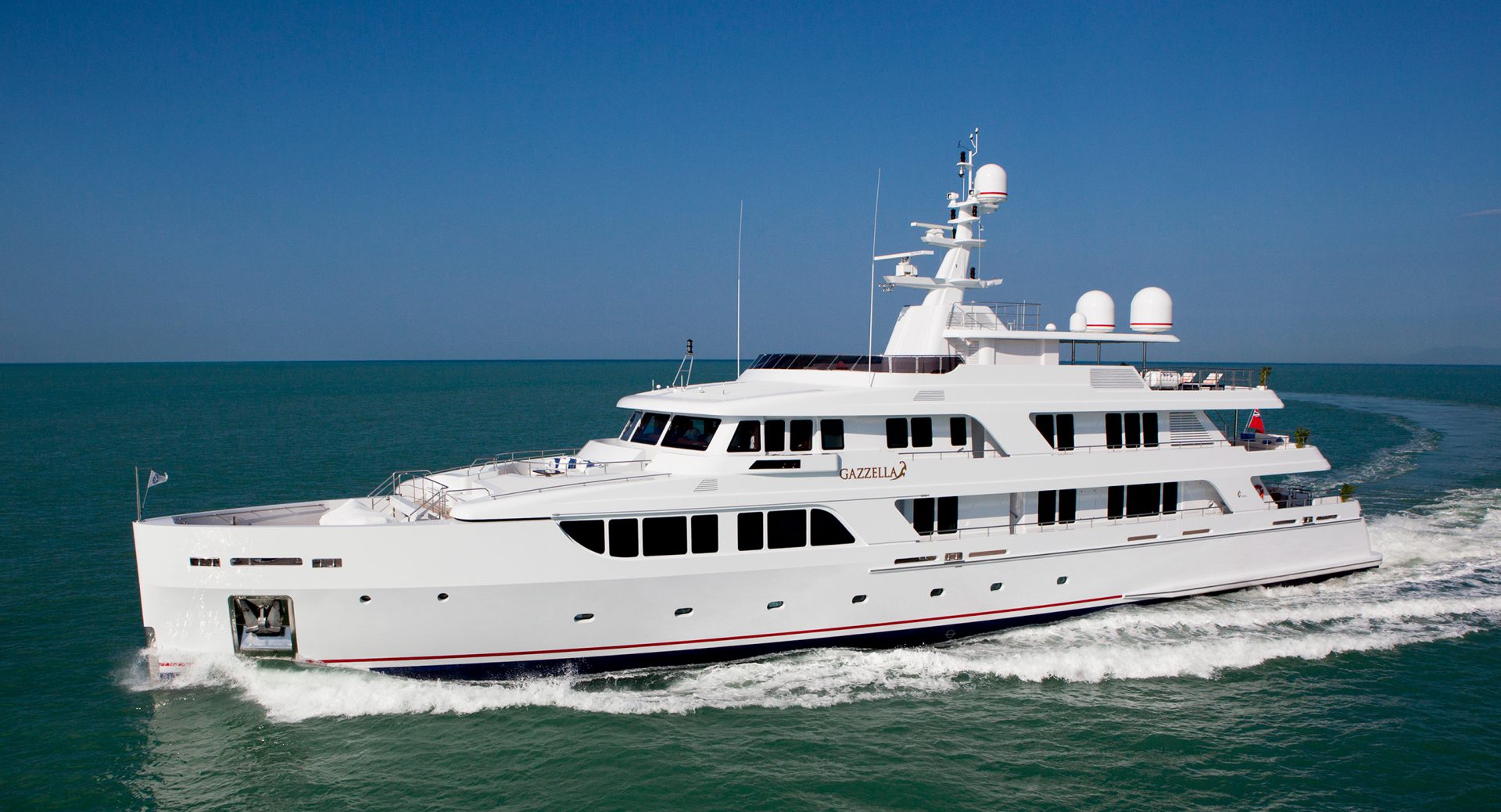 In the wave of the great success met by the first two units of 42 metres belonging to the Vintage Series, namely Hull F73 now M.Y. Magari built in 2011 and Hull F75 now M.Y. Libra built in 2013, Codecasa Shipyards delivered in July, 2015  the 50 metres version.

The new CODECASA 50 – Vintage Series, Hull C121, m.y. Gazzella, was also designed by Codecasa Shipyards  in house designers, with the aim of finding the perfect balance between past and present.

For the first 50 metres of the Vintage Series, the m.y. Gazzella, the Owner has chosen the white colour for both hull and superstructure. The plain and traditional exterior lines combine with classic and rich interiors. As soon as you go in, your eyes is caught by the richness of the Interiors, which throughout the Yacht are made of mahogany wood and mahogany plume, with floorings that feature precious marbles and onyx or carpet with elegant decorations, depending on the areas. The main salon is made of a large conversation area with two big sofas, four armchairs in the red and gold tones, placed around a coffee table of mahogany wood with gilded details and in front of a 65” TV.

The whole area of the Salon is well lit by the natural light coming from the big windows and it is further increased by the continuation with the dining room, from which it is divided by a low partition cabinet. The dining room, with its rectangular table with the top of mahogany wood richly decorated with maple wood inlays, is able to sit up to 12 people.

From the dining room, we go into the pantry on the portside and hence to the galley, equipped with last-generation appliances, distributed between the cabinets and the practical centre island. A dumb-waiter directly connects the Main Deck pantry with the Bridge Deck pantry. Going forward on the starboard side, from the dining room we reach the main hallway, the flooring of which feature precious types of marble inlays. Hence begins the main staircase with its elegant handrail of dark metal with gilded details and with the walls covered of a material combining golden-leaf and mother-of-pearl that connects the Bridge Deck to the Guests’ area in the Lower Deck.

The elevator, for four people, connects all decks, from the Lower Deck up to the Sun Deck.

Going forward on the Main deck we reach the VIP Cabin, with ensuite bathroom, which is close to the Owner’s Suite, this latter with private office, large cabin, spacious walk-in closets and two bathrooms, covered of Honey Onyx and connected to each other through the shower, the walls of which are decorated with an elegant floral mosaic.

In the Lower Deck there are four Cabins for the Guests, two double-bedded and two twin-bedded, each one of them obviously with its own bathroom, besides the Crew Area, made of four double cabins, the Chief Engineer’s cabin, the crew mess and the laundry, equipped with three washers and three dryers. From the Crew Area it is possible to reach the Deck underneath, with the dry storage, built-in walking-in refrigerators and large cold rooms.

On the Bridge Deck there is the cozy Skylounge, more intimate and less formal than the Main Deck Salon, featuring a comfortable sitting area in front of a 65” TV, a breakfast table, a bar furniture. Here the main colour is blue, chosen for the marble used for the coffee table and bar furniture tops as well as for the upholstering fabrics and the carpet decoration. The deck is completed by a day toilet, a pantry and the Captain’s cabin, this latter directly connected with the radio room and the wheelhouse, provided with modern navigation, search and communication equipment in order to offer the utmost safety to the Owner and his Guests.

The exterior areas are comfortable on all decks. The pleasant relaxation area on the Main Deck aft cockpit alternates with the alfresco dining area on the aft Bridge Deck, which is able to sit 12 people. Finally the Sun Deck, that can be reached also by the elevator, has a large sunbathing area, a sitting area, a bar corner and then a large Jacuzzi bathtub, for five/six people, provided with comfortable sunbathing mattresses.

Throughout the yacht, the best care has been devoted to the selection of the equipment for the satellite reception, Internet and entertainment systems. 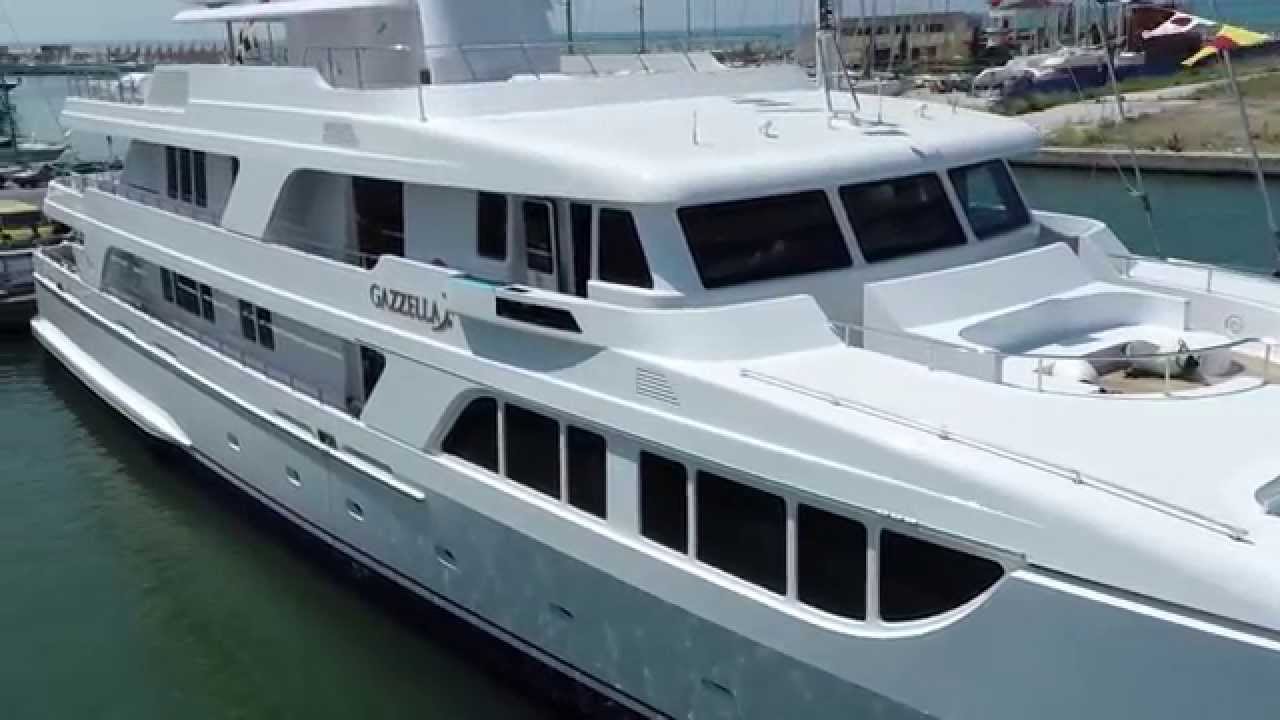 This site uses cookies to improve the browsing experience, to allow users to benefit from all online services and to display advertising, learn more reading our privacy and cookie policy. By closing this banner, by scrolling this page, by clicking on any link or by navigate this site you consent to the use of cookies.